From Goblin Market to Skullport 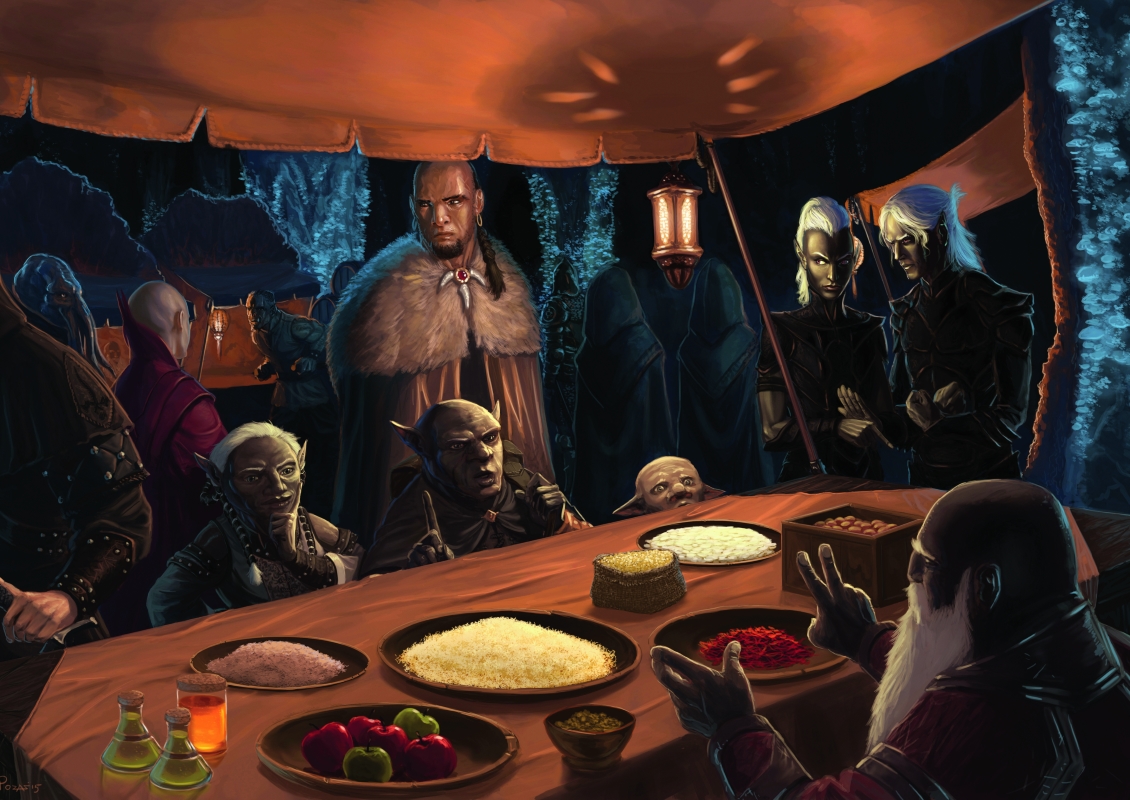 Following the bloody trail through the secret door of the Map Room, the party descended a dark stairway. After what seemed like hours, they arrived at a cavernous chamber with a ceiling held up by central pillars.

Several chandeliers festooned with continual flames high above gave the chamber a dim, flickering light that the vendors and patrons didn’t seem to mind. The place was full of all manner of creatures: goblins, deep gnomes, dwarves, drow, humans, and orcs mingled.

Split by the Slave Block, two long aisles contained most merchants’ excuses for storefronts, business, and entertainments, with the most powerful claiming places along the chamber’s large centre pillars.

The constant murmur of commerce was occasionally punctuated by arguments as flesh, drugs, stolen goods, and precious information were bought and sold. The threat of violence lingered unspoken with each transaction, but the formidable bugbears carrying truncheons kept the brawling limited. And the towering presence of Ganag-Nagan, the two-headed ettin near the western door reinforced the market’s rules.

No slaves were present at the Slave Block, but the Veiled Man, a heavily perfumed slaver hidden behind silk scarves, was happy to talk when he learned Frilxiun was a potential buyer.

From the slave merchant Frilxiun learned that although the nobles they were searching for did not pass through the Goblin Market, it was well known in the Undercity that the Xanathar Guild had snatched nobles from the streets of Waterdeep. If they were anywhere, they were likely in Skull Island, the formidable island fortress outside Skullport, held by the Guild.

He also pointed out another person inquiring about the nobles: Vincent Trench, a tall, dark skinned human in a long black leather cloak. The inquisitive was hired by House Melshimber to find their missing son, and he offered Frilxiun a partnership in exchange for half of the reward for Allory’s safe return. He alluded to a contact he had nearby, but the party rebuffed his offer.

Instead, they joined up with a goblin cabbage merchant, Chuffy, who ran a produce stand called “Green Eats.” The goblin green-grocer was departing shortly with his old mining carts full of produce, and was looking for mercenary caravan guards. After brief negotiations and intimidation by Parapetta, Chuffy the cabbagemonger agreed to pay each party member 20 dragons upon safe arrival in Skullport with the goods.

In all, the journey took the rest of the day. Rika Sneakthief helped navigate the chambers of Undermountain, leading the caravan, trembling, and shaking to the Dead Eyes Watchpost.

The goblins approached, shaking and quivering to fawn beneath the gaze of a giant skull that floated silently at the end of the passageway. With a cyclopean ruby, the creature stared straight ahead, small glowing rubies encircling the skull.

This silent looming creature was a Death Tyrant, an undead monster of legend with baleful power and a gaze that could kill on sight. The creature did not move as the goblins held out the symbols of the Xanathar Guild, and after a long moment of silence, the door opened, and Xanathar thugs stepped out. A tall human woman in furs and totems strode forward, accompanied by a half dozen bugbears. Beneath the gaze of the Death Tyrant, the bugbears spoke briefly to the goblins, and took the large sack of coins the merchants presented.

The caravan moved into a chamber with a large symbol of the Xanathar Guild drawn in blood on the floor, past the watching eyes of another half dozen heavily-armed humans, and then into the tunnels beyond the Xanathar watchpost.

A Pair of Trolls

After a short travel through the winding corridors of the Arcane Chambers, the caravan was attacked by a pair of trolls. Frilxiun frightened one with spellcraft, and the party defeated the first troll before the other one returned. The second one fell as well, and the goblins began slowly moving their carts down a long, dark stairway to the Sargauth Level. As the goblin porters moved the wagons, the party investigated a few rooms. They found a vaulted chamber lined with dwarven statues, large double doors locked with a dwarven rune. And a room with four pillars carved in the likeness of the elven Seldarine, with a small curious creature, like a golden box with spindly legs walking around them counter-clockwise. The adventurers did not engage, and chose not to explore further.

Moving the carts of cabbages down the long dark stairway took hours, but the caravan finally arrived at the next level. The third level of Undermountain was cooler, and humid. Lichen grew on the walls, and moisture collected on the ceilings. The first chamber contained long rows of tombs—a vault of the dwarves—stacked like shelves in four long rows like bookcases in a library. Passing through the somber room and the passageway beyond, Rika paused and whispered a warning: a drow watchpost was ahead.

The dark elves have had a presence in Undermountain for centuries, known then as the fortress of Kyorlamshin before the Mad Mage hunted them. Even now, the drow still maintain strongholds throughout the dungeon. The goblins call this area of the Sargauth Level the Spider Halls, and the drow are known to hunt these corridors.

Rika and Tinu scouted ahead, peering into the entryway to the drow stronghold. Thick cobwebs stretched between the walls, forming a canopy across the veiling, from which hundreds of tiny spiders dangled on silken threads. Flanking the entrance, two large statues were wrapped completely in spider silk, creating eery, but beautiful sculptures of thin layered gauze in red and purple and black. Four white-furred brutish beastmen stood at the ready under the direction of a male dark elf in long flowing cloaks, bearing a twisted black staff. Tinu glimpsed a silver glyph the elf wore proudly around his neck: the insignia of the powerful drow noble House Auvryndar from the Underdark city of Ched Nasad.

Rika and Tinu turned around, and the caravan carefully crept away.

They entered narrow tunnels of unworked stone and made their way to a large cavern. There, the goblins began searching for a secret door. As they were searching two giant spiders materialized out of thin air and attacked the party. The creatures attacked, and disappeared with hit and run attacks: Phase Spiders. One goblin porter was lost before the adventurers defeated the giant spiders, and Rika found the correct stalagmite to open the secret door.

Through the narrow passage, the party could see the cold subterranean river known as the
Sargauth rushing past. The goblins loaded their carts onto an old battered barge, and began poling the cargo down the fast-flowing river. They quickly passed caves and tunnels, and once saw the tail and fin of a large sea beast, but made it safely down the underground river to the mammoth cavern that held Skullport.

The river opens up into a bay, and the smell of brine and sewage fills the air. In the center of the bay is an island with an ancient fortress built upon it. A massive limestone column connects the island to the ceiling of the cavern, with dimly lit windows and staircases carved into its surface. This fortress is Skull island, the redoubt of the Xanathar Guild, a prison, and dungeon for slaves. Across a rickety bridge, the island connected to the Port of Shadow.

In the dim phosphorous light streaking the huge cavern, the party saw the pirate shantytown of Skullport. Interconnected by narrow catwalks and rickety scaffolding, the houses built on stilts were haphazardly erected in a dense and towering jumble of wood, rope, mastheads, and zurkhwood fungus.

The port of Skullport was a dank slum, the streets were littered with garbage. The party passed a large platform of rusting manacles and chains in the center of the square, and made their way through narrow, dark alleys, past forlorn skulkers to a run-down inn. The sign swinging above the door read “Guts and Garters.” The proprietor of the ramshackle inn was a sullen, soft-spoken tiefling named Quietude. For 5 shards, a bedroom could be rented for an hour, or for 5 dragons, for a day.