A surprisingly young woman, with an unruly tumble of black hair above piercing green eyes. She prefers practical clothes of a blackish-purplish hue, with a long coat covered in elven-inked designs.

Vajra was born in Tethyr to the paladin Tamik al Safahr and Parama yr Manshaka. Grew up in Sheshyr House in Tethyr with several older siblings. She came to Waterdeep and briefly joined the Watchful Order of Magists and Protectors before becoming the apprentice of Samarck Dhanzscul, the former Blackstaff. They later became lovers.

When the borders of Blackstaff Tower are entered, the animated skeleton of Khondar swirls around the tower, eternally chased and ripped apart by the illusions of the hounds, replaying itself as a warning to potential intruders.

Vajra is the current Blackstaff and archmage of the city. She is the official leader of the Grey Hands, the city’s secret agents that safeguard the city from threats within and without. 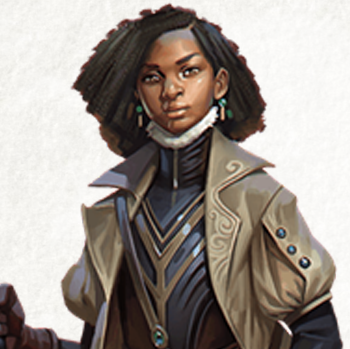