A powerful and ageless beauty, Open Lord Laeral Silverhand does not look her 1200 years of age. She is incredibly organized, friendly and accommodating, leading almost everyone who meets her, even the haughty nobles of Waterdeep, to consider her a true friend.

Laeral is infuriated by magic-users who employ their power to deceive and exert baleful influence over others. She dislikes doppelgangers and slave-owners, and under her rule the city has banned the use of mind-altering magic.

Laeral Silverhand is the fifth of seven daughters of the goddess Mystra. She ruled Luskan as Witch-Queen of the North, and married the First Blackstaff, the Lord Mage of Waterdeep. She is Chosen of Mystra, a high-priestess of the faith and a mortal imbued with unprecedented magical power.

Lady Silverhand has devoted over a millennium to fighting evil and imbalances in the Weave. With her former husband, she was a leader of the Silverstars. There are rumors that her return has given the faction new power and purpose.

She currently serves as Waterdeep’s Open Lord, a position she took three years ago, deposing the former Open Lord Dagult Neverember. Last year, she survived an assassination attempt amid the Death Masks coup that claimed the lives of a dozen Masked Lords. 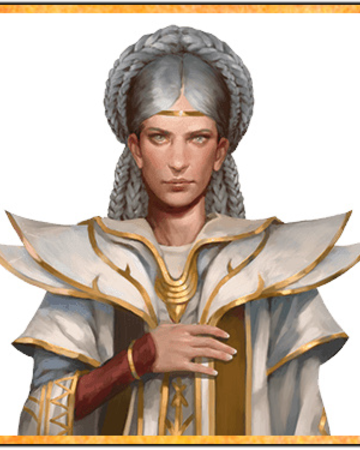