Mirt “the Moneylender” is a fat, wheezing old rogue and retired adventurer. He is a loud, tipsy braggart, but only a stranger to Waterdeep would underestimate his agility and cunning.

Mirt made his fortune as an adventurer in Undermountain, alongside his good friend Durnan, after a colorful career as a mercenary general. Over the years, Mirt—also known as Mirt the Merciless, the Old Wolf, or Lord Walrus—has made many enemies all over the Sword Coast, but also a few powerful friends.

The worst-kept secret in Waterdeep is that Mirt is a Harper as well as a Masked Lord of Waterdeep. He is close friends with Lady Silverhand and Elminster, which may be why the law often overlooks his checkered behavior.

Mirt’s latest scandal involves the recent death of the Wavemaster of Valkur, According to reports, Mirt beat the high priest to death in anger over the refusal to raise from the dead one of his whore spies. In light of the Death Masks assassinations and turmoil, Mirt has been told to remain in his home, under house arrest until the new Masked Lords can be elected on Midsummer’s Day. 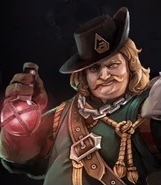