Legendary traveler and storyteller, famous for his guidebooks

Volothamp Geddarm, or Volo for short, is a legendary traveler and storyteller, and was most famous for his guidebooks.

He is oft portrayed as the quintessential “go-to guy” of the Realms even if his information is, at best, half-accurate. He is also said to be too curious for his own good.

As travelling scholar and minor wizard, Volo was always on the lookout for an exposé. He all too frequently was at odds with the archmage Elminster, who preferred some things to be kept in the dark.

At some point before 1385 DR, Volo was trapped by an imprisonment spell and was released only after a century passed, some time after 1482 DR. Upon his return, he was informed by Elminster about the events of the Spellplague and the Second Sundering.

When he isn’t’ traveling abroad, Volo can be found enjoying the taverns and festhalls of Waterdeep. He is currently on tour at the city’s leading taverns to sell his latest books: Volo’s Guide to Monsters and Volo’s Waterdeep Enchiridion, a chapbook updating Volo’s Guide to Waterdeep to the changes of the latest century. 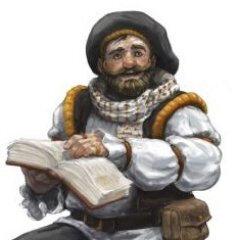