Waterdeep’s most notorious and colorful ward is also the oldest. Situated on Deepwater Harbor of Waterdeep, it holds the docks, shipbuilding yards, and warehouses for sea trade. Compared to the rest of the City, the Dock Ward slum is exceptionally dirty, smelly, and particularly dangerous.

Travelers’ tales portray it as a lawless, brawling place of drunks, smugglers, roaming monsters, and fell magic, which is not all that far from the truth. The bustling harbor scene and its attendant activities dominate this ward.

Black stone columns along the shore, like jagged teeth rising from the sea. Seawalls of black glistening stone and jettied wood docks listing toward the sea. Purplish barnacles grow on buildings and boardwalks, finding more nourishment in the squalor than the sea.

This central seaside neighborhood smells of salt, sweet fish, tarred wood and a lingering hangover. A borough of seaside views, commerce and depravity, The Fogwalk gets its name from a white morning mist that rolls in over the dark waters of the Sea of Swords to swirl along the docks.

A maze of tall wood and stone jettied buildings, crowded lanes and winding alleys, this central Dock Ward neighborhood slopes up toward the city, looming over its neighbors, buildings joined together by bridges of wood and rope. The air is cold and damp, smells of fish, rotten wood, and stinging salt. The towering rowhouses are decrepit—worn stone, rotting wood, leaking roofs—crowded tenements for the wretched inhabitants of the Docks.
The Honorable Knight stands tall at the north end of the district, ever vigilant, as if keeping the evil at bay and safeguarding Castle Waterdeep.

A borough built on the ruins of others too deep now to tell. Upon a foundation of thick-walled stone to keep out the wind and cold, the construction is haphazard, almost organic, like the buildings grew at absurd angles. Rumors persist that the Gut is deeper than it is tall, delving into the Undermountain and utter madness.

A sprawl of alleys, warehouses, and multileveled wood buildings, smelling of fish, infested with mold and fungus, inhabited by the poor, the lost, and the transcendent. 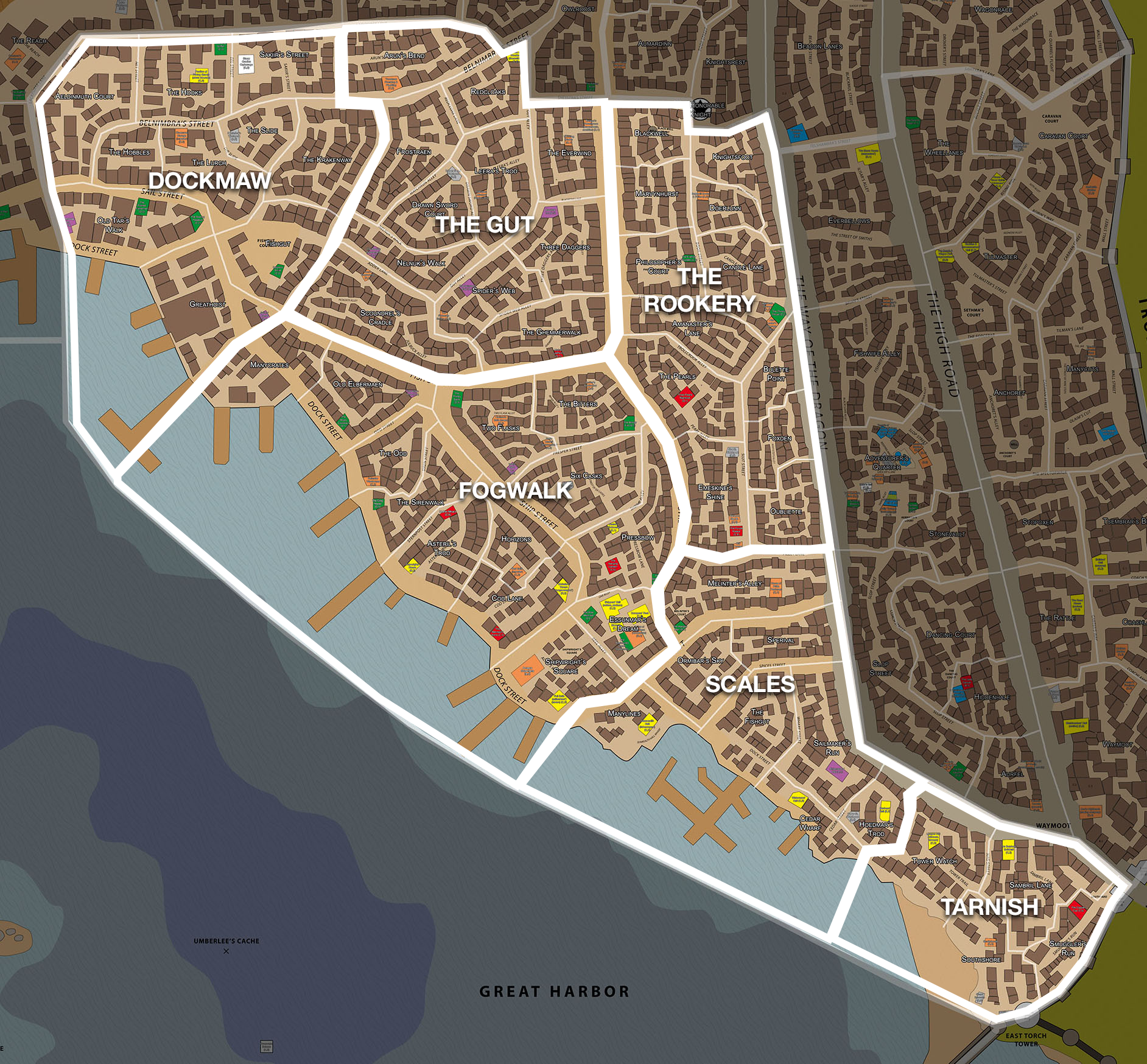 Lowtown | The City of Splendors