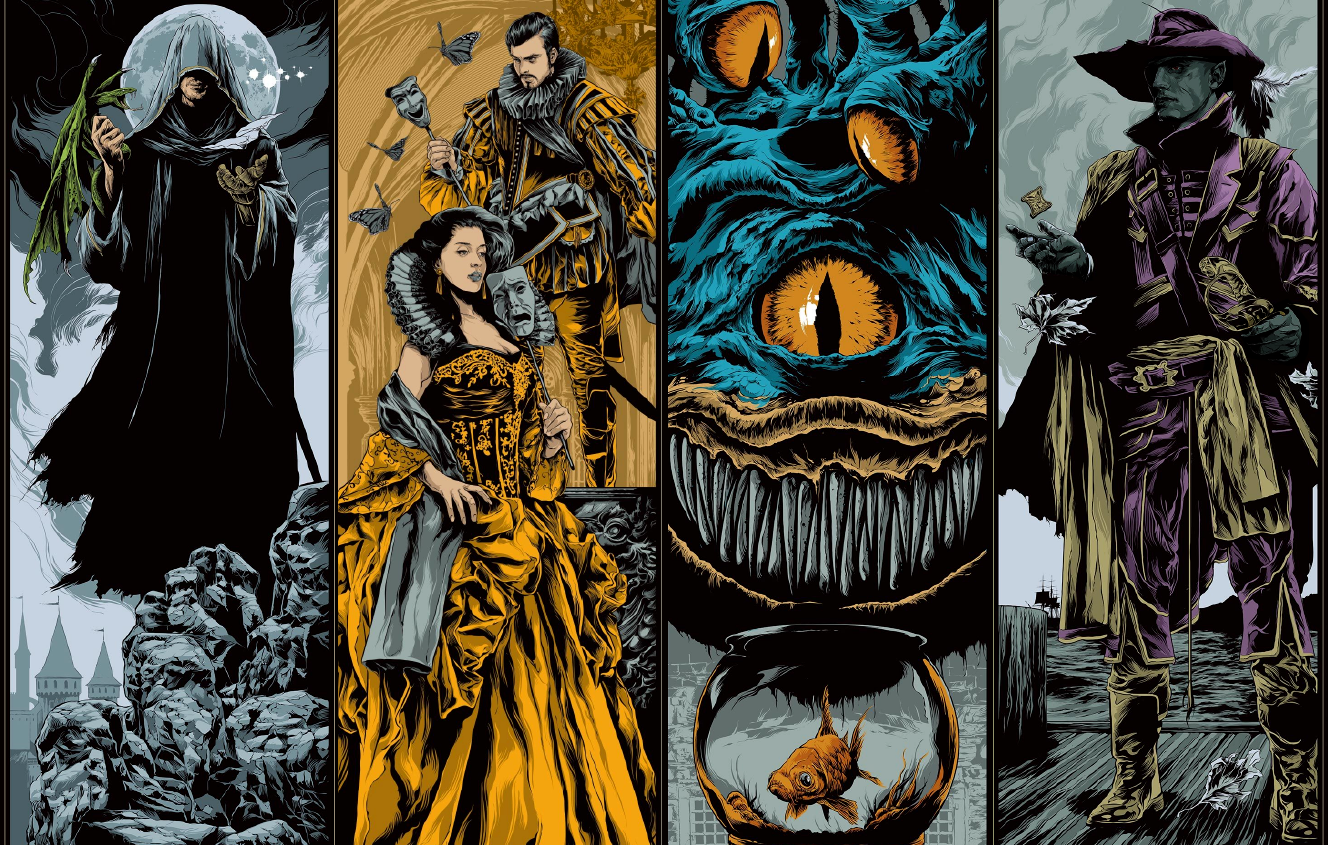 Waterdeep is a city full of intrigue. From the shadowy harbor to the brightly-lit ballrooms, wars are waged through words; though a dagger in the night helps smooth things along.

The Lords’ Alliance is made up of the lords of the cities along the Sword Coast.

The rulers of Waterdeep are Lady Silverhand and the mysterious Masked Lords.

The Nobility of Waterdeep

Though not a military nobility, and with no official political power, the nobles exert a great deal of clout, and often determine who becomes a Masked Lord.

In the chaotic underground of Skullport, a city of thieves, murderers and slave-traders, a council of powerful undead wizards impose some semblance of order.

The Guard, Waterdeep’s army, defends the city from attack, patrols the countryside, and holds garrisons at the edges of Waterdeep’s territory. The Watch serves as Waterdeep’s police force, patrolling the citystreets, while the Griffon Cavalry patrol the skies and the Navy watches the sea.

The White Sails are a merchant marine company based in Mintarn and possibly the greatest navy in the Sea of Swords. They once operated as the Navy and Guard for Waterdeep, and have deep ties to the city.

The Black Network are a rich and powerful mercenary company whose armies can be found throughout the Realms. Wherever there is gold or influence to be had, the Zhentarim have a stake in it.

Bregan D’aerthe are an elite drow mercenary company known primarily for their legendary leader, Jarlaxle Baenre. They are some of the few drow seen on the surface, and have a tense relationship with the drow houses in the Underdark.

The City of Splendors is home to countless fighters, many employed in the private militias of Waterdeep’s nobility. A large underclass of warriors intermittently inhabit Dock Ward and South Ward, until the next caravan, adventuring company, or warmonger needs their services.

Adventuring Companies
In Waterdeep chartered adventuring companies are given “legal” recognition and rights of claiming missions and rewards, rights that are denied to unsanctioned companies. Outside the city walls—and beneath the streets—the Guard often deputizes adventuring companies as official authorities, capable of enforcing the law of the land.

The Nobility of Waterdeep

The Waterdhavian nobility consists of powerful merchant princes. It is only fitting that the greatest mercantile city in the North should have a plutocracy.

The Guilds of Waterdeep

Competing with the powerful merchant princes are the guilds, mercantile and craft organizations, that control much of the life-blood of the city.

The Undermountain district of Downshadow has been leased to the mining company for twenty years. They maintain law and order in the frontier community with the help of Zhentarim mercenaries.

The major pantheons worshipped in Waterdeep and the surrounding lands.

Polytheistic Waterdeep is home to all manner of faiths. Some of the preeminent temples in the world are based in the metropolis.

Every major church has orders dedicated to the god’s tenets and mission. Many have a strong presence in the city.

There are secret temples and hidden shrines to dark gods, fiends, and otherworldly beings, often hidden away beneath the streets of the city. Though worship of any power is legal, many of the rituals and sacraments are illegal, and open worshippers are regarded with suspicion.

The Grey Hands are Waterdeep’s special agents, acting on behalf of the Lords on missions the Watch can’t or won’t do.

The Harpers are a group of spies that spread the message of equality and oppose tyrants and all who abuse power.

The Silverstars are a group who seek to bring together humans, elves, and other races against the many dangers lurking in the shadows of Faerûn. They are known for their moral flexibility.

Knights of the Shield

The Knights of the Shield are a secretive order of merchants and nobles interested in manipulating political and mercantile activity. Their influence stems from their ability to acquire, manipulate, and wield information.

The Red Sashes are a vigilante group based in Waterdeep. Not an excessively violent group, the Red Sashes arrest the guilty and free the innocent, typically when the Watch fail.

This criminal and slaver network is the Thieves Guild of Waterdeep, and one of the most powerful on the Sword Coast. They have a massive stronghold in Skullport deep below the city.

The Zhentarim, also known as the Black Network, are a mercenary company and criminal organization that has often found itself on the wrong side of history, backing tyrants and engaging in crime.

Of the dozens of street gangs in the city, most pledge loyalty to the Xanathar. But some have recently switched allegiance to the Zhentarim, and blood is spilling on the city streets.

A criminal organization rooted in tiefling communities; it’s said there are nine Lords that each control criminal operations in the largest cities of Faerûn.

The Shadow Thieves once controlled all crime in the city, but they were broken centuries ago. The Xanathar Guild has since consolidated most of the organized crime in Waterdeep.

This shadowy underworld organization of spies, smugglers, and assassins is based out of Skullport. They are rumored to have a connection to the drow.

Waterdeep’s magical guild, academy, and law enforcement. The Watchful Order regulates all magic-users and magical items in the city, maintains the city’s protections, and lends support to the Watch.

Arcane spellcasters have long been drawn to cosmopolitan Waterdeep. The City of Splendors has a strong tradition of magical research, and its magical colleges are some of the greatest in the world.

The Bladesingers were legendary elven warriors said to blend swordplay and arcane magic into a seamless whole. They are remembered as protectors and champions of the elven communities.

Founded by the Mad Mage himself, Dweomercore is the preeminent dark arts academy in the Realms, hidden deep in Undermountain. Those who excel are chosen as one of the Mad Mage’s apprentices—some of the most powerful spellcasters—known as Halaster’s Heirs.

The Red Wizards of Thay are powerful mages, demonologists, experimenters and scholars. They are identifiable by their shaved and tattooed heads and red robes.

A mercantile company and wizards’ guild that is said to operate out of the rebuilt Host Tower of the Arcane in Luskan. The organization is shrouded in mystery, as even its most high-ranking members are unknown.

Guardians of the Weave

Alliance of arcane spellcasters who banded together to defend the Weave from the malevolent wizards and warlocks of Faerûn. They believe the greatest threat to the Weave is the church of Shar and the Shadow Weave itself.