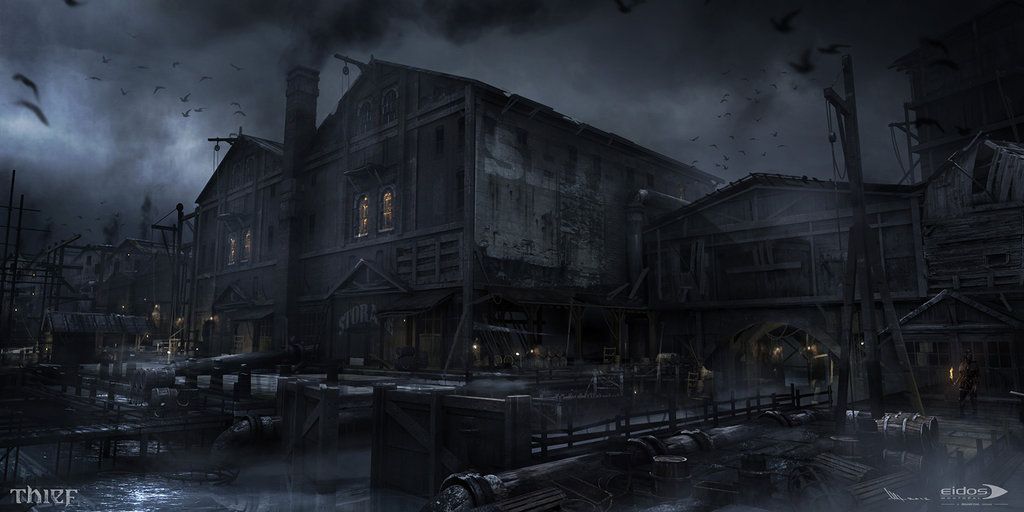 South of Spices street, this Dock Ward district is built on stilted platforms and boardwalks over top the flooded beach. The ground is sour, with flooded beaches and salty mud flats, and it stinks of fish and brine and salt. You can see crabs and breeding insects through the gaps in the boards. The high tides flood the neighborhood, leaving the boardwalks wet and slimy with seaweed.

The Sleeping Snake
Tavern, brothel.
This rowdy tavern is roughly furnished in poorly mended furniture as the dockhands who drink here are prone to violence. Mercenaries can be hired here if you can do any business amid the howls and hoots that ring out as women dance on the tables. The joke goes that any snake able to sleep through all this must be very, very dead. Members of the Black Boar Tribe can usually be found drinking here. Located on the corner of Dock Street and Fishgut Alley.

The Wavehall
Temple to Valkur
A large building that serves as a temple as well as a boarding house for sailors and the widows and orphans of those lost at sea.

Watennens’ Hall
Guildhall, Watermen’s Guild.
A four-story wooden warehouse that serves as the headquarters for the Watermen’s Guild, attached to a large boathouse for their skiffs and ferries, and storage for any all flotsam and jetsam found while keeping the harbor clear. Located on the docks along Dock Street near Fishgut Alley

Nestaur the Ropemaker
Business, mariner gear and supplies.
This ground-floor shop is in a two-story wooden row house overlooking the sea. The small one-room is shop is crowded with coils of ropes, pulleys, and other mariner supplies.
Located at Southeast Dock Street near Watennen’s Hall.

Shipmasters’ Hall
Sea Captain’s Inn.
A grand three-story private inn and dining club for captains, first mates and ship owners and their guests, with an interior elegance that far outweighs its exterior. It is sponsored by the Master Mariners’ Guild. Located on Wharf Street.