This central seaside neighborhood in the Dock Ward smells of salt, sweet fish, tarred wood and a lingering hangover. A borough of seaside views, commerce and depravity, The Fogwalk provides the main seaborne entry to Waterdeep by way of Deepwater Harbor. It runs along Dock Street from Odd Street to Spices Street where it gives way to the Scales neighborhood to the south.

Moss grows around the docks and on the walls of nearby buildings. At night it glows a bright bioluminescent blue. Purplish barnacles grow over the docks, buildings, and boardwalks. It’s said they’ll attach to people if they stay still for long enough, but no one waits around long enough to see. A white morning mist rolls in over the dark waters of the Sea of Swords to swirl along the docks; it thins throughout the day and returns at night.

Manycrates. This northwestern Fogwalk neighborhood sanwiched between Dock Street and Fish Street connects to the Greathoist neighborhood of the Dockmaw District. The warehouses and shipyards of Zulpair Shipping Company make up over half of the neighborhood, and the rest of it holds various warehouses, apartments, and apartments above warehouses.

The Angry Coxswain
Tavern
This tavern is entirely the dive one would expect. Located near the water, this low-rent alehouse looks terrible, but caters to people with silver to spend on quality alcohol. The owner, a Mulhorand ex-sailor named Ramas Shehepset, knows how to pack the customers in with low-cost, high-quality libations. The house brewmaster, Orth Ironchisel, brews duergar beers bitter enough to make a troll blanch, as well as ales as light and fresh as spring love.

The Bloody Fist
Tavern
The Bloody Fist is a dive bar located on Snail Street in Waterdeep’s Dock ward. The proprietor, a warlike half-orc named Uglukh Vorl, is nearly as brutish as the clientele. It has a reputation as being the hang out of all sorts of unsavoury types and is rumoured to be a contact point for those interested in meeting fences.

Sailor’s Last Request
Temple of Valkur
A far cry from the majestic Queenspire devoted to Umberlee, this former warehouse on the corner of Dock and Odd Streets is a utilitarian chapel dedicated to Valkur, the god of sailors.

The Mermaid’s Arms
Festhall
This large, fairly new establishment is adorned with rich sea-blue draperies and takes the form of a series of elegant dining lounges, in which one dines or just drinks with an attractive host or hostess (or alone). One can take rooms for the night alone, or with someone else. Increasingly, the Arms (having acquired a safe reputation) is being used by single gentlefolk on the prowl for a night of love. The Arms is large, well-lit, always busy, and can be quite expensive for the works (stabling, a room, meals, drinks, and companionship are all billed separately). The Arms is run by Calathia Frost, a handsome and winning lady with a gorgeous, throaty voice.

Muleskull Tavern
Tavern
A simple tavern on Ship Street, the drinks are cheap and the hangovers feel like you’ve been kicked in the head by a mule. The Dungsweepers’ Guild meet in the backroom of the tavern. 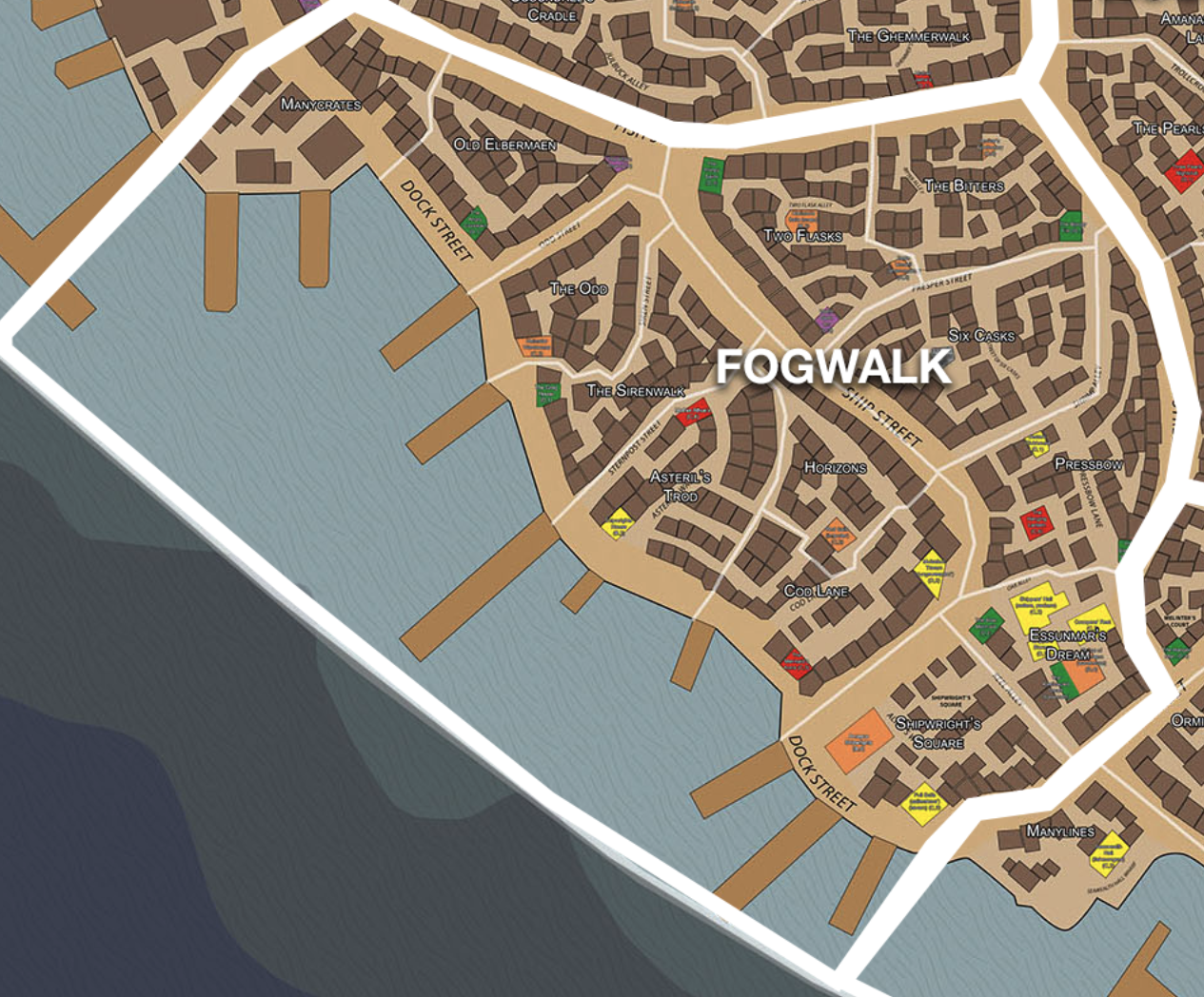