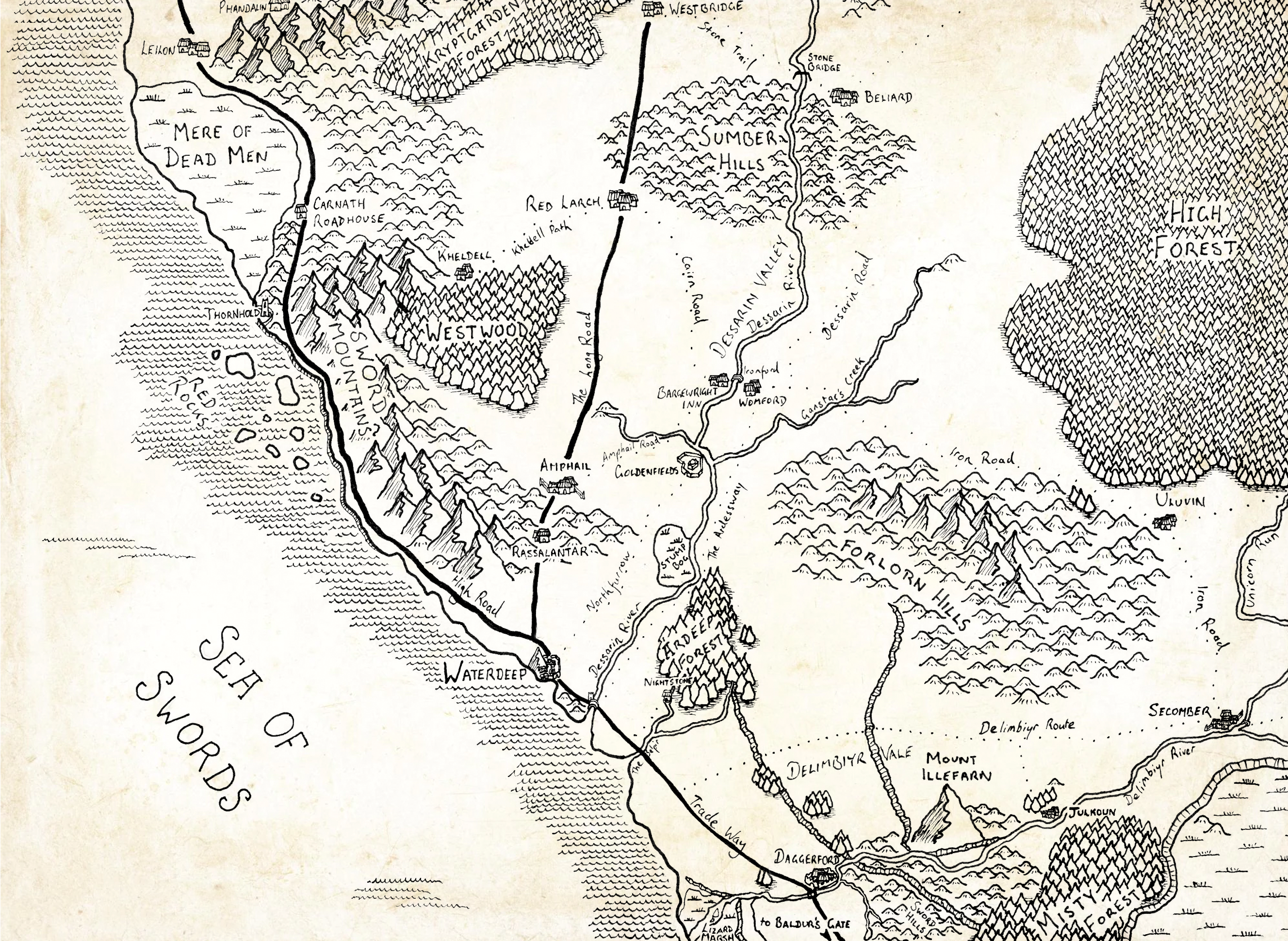 Although the City of Splendors does not formally claim any territory outside its walls, the Lords of Waterdeep have always kept a close watch over the regions stretching from the Mere of Dead Men to the mouth of the River Delimbiyr, and from the Sea of Swords to the Dessarin Vale.

The Waterdeep region includes human thorps and hamlets, dwarven clanholds, and elven steadings. The total population exceeds that of the city itself by a factor of two in summer months, to as much as ten in the winter.

In general, human communities, located primarily in the open lowlands, are surrounded by lands used primarily for farming and herding.

Elven communities usually lie within small woodlands, which the Fair Folk tend much as a human farmer tends his fields.

Dwarven communities, mostly located in the Sword Mountains and the Forlorn Hills, rarely leave clear aboveground footprints, except in the immediate vicinity of underground excavations.

The environs of Waterdeep are commonly divided into nine distinct sections: Ardeep, Delimbiyran, Elembar, the Forlorn Hills, the Lower Dessarin Vale, the Mere of Dead Men, the Northern Coast, the Southern Coast, and the Sword Mountains.

The realm of Ardeep encompassed the area later known as the Ardeep Forest as well as lands north of the River Delimbiyr. It is an ancient realm of moon elves dating back to the First Flowering, around −23,600 DR. Many of the elves of Ardeep left for Evermeet centuries ago, but a few remain guarding their ancestral realm from intruders.

Originally named for the Kingdom of Man and its capital city, the northern bank of the lower Delimbiyr Vale, just west of the Forlorn Hills, is still known as Delimbiyran. Much of the Delimbiyran region, including the town of Daggerford, lies within the Duchy of Daggerford, and residents of the duchy are considered part of the Western Heartlands region.

Daggerford is a small but consequential walled town located in the Delimbiyr Vale. Despite its modest size and somewhat inflated sense of importance, Daggerford is resilient. It is something of a relic from the old kingdom of Delimbiyr, too stubborn to fall even when a series of wars, crusades, and other conflicts threatened the entirety of the Sword Coast.

The open lands between Ardeep Forest and the Forlorn Hills are known as Elembar, after the kingdom that once claimed them. In the Year of Risen Towers (146 DR), humans founded Elembar in the unclaimed lands between the moon elven kingdom of Ardeep and the shield dwarven kingdom of Dardath. Northern and central Elembar fell to an orc horde in the Year of the Fortress Scoured (511 DR) and eventually became the Elembar of today.

The slow collapse of dwarf-ruled Dardath in centuries past eventually gave rise to the name that the hills east of Ardeep Forest now bear. Also known as the Fallen Hills, the Forlorn Hills are cold and empty, home only to scattered flocks of wild sheep and the creatures that prey upon them. Ruins and abandoned mines are scattered throughout the rolling landscape, largely hidden from creatures flying above by the shadows of sheltering tors and the cloying mists that rarely burn off before midday.

The lower Dessarin Vale is a wide, fertile basin through which great volumes of water and commerce flow. The land slopes up north toward the Sword Mountains and east toward the Forlorn Hills, forming a vast flood plain in between. The region is heavily farmed and dotted with thorps and hamlets almost too numerous to count.

The rocky uplands north of Waterdeep are owned by various Waterdhavian noble families and held by crofters in their employ. Although a few hardscrabble fields dot the landscape, this region is used primarily for grazing large flocks of sheep and herds of goats.

Communities in this area tend to be very small, and each is home to just a handful of families. Although the Guard keeps the monsters that come down from the Sword Mountains and the Mere of Dead Men in check, a dragon could wing in from the sea at any time to grab a quick snack.

South of Waterdeep, the coast slopes down to the sea via a maze of gullies carved by countless tiny streams. Although the region is frequently lashed by fierce tempests blown in from the Sea of Storms, scrubby trees peek up from sheltered ravines here and there. The shore is marshy only near the outflow of the Selpir, and the only beach of note has been transformed into the Rat Hills.

North of Waterdeep, the Sword Mountains march north toward the Neverwinter Woods. Although not militarily significant, this range shields the Dessarin river valley and the High Forest from the worst of the storms that blow in from the Trackless Sea. The western flanks of the range are home to orcs, bugbears, kobolds, and other dangerous creatures.

Self-styled bandit lords, such as Amalkyn the Black and the wizard Helduth Flamespell,
have long-established holds in the region. The southern peaks are home to stone giants and more fearsome menaces, as well as sylphs on the high ledges and peaks. The Sword Mountains are littered with ruins dating back to the orcish empire of Uruth Ukrypt and the dwarf and gnome clanholds that preceded it.

This vast salt swamp stretches along the Sword Coast west of the Sword Mountains. Seldom visited by civilized races, this desolate, insect-ridden place is home to many fell creatures. The mere gained its name from an incident involving the armies of Phalorm, Uthtower, and the Horde of the Wastes. After the King of Uthtower beseeched the realm’s former mage royal to save his kingdom from the orcs, the lich Iniarv caused the sea to rise up and flood the whole area, drowning all three armies, as well as the folk of the realm.