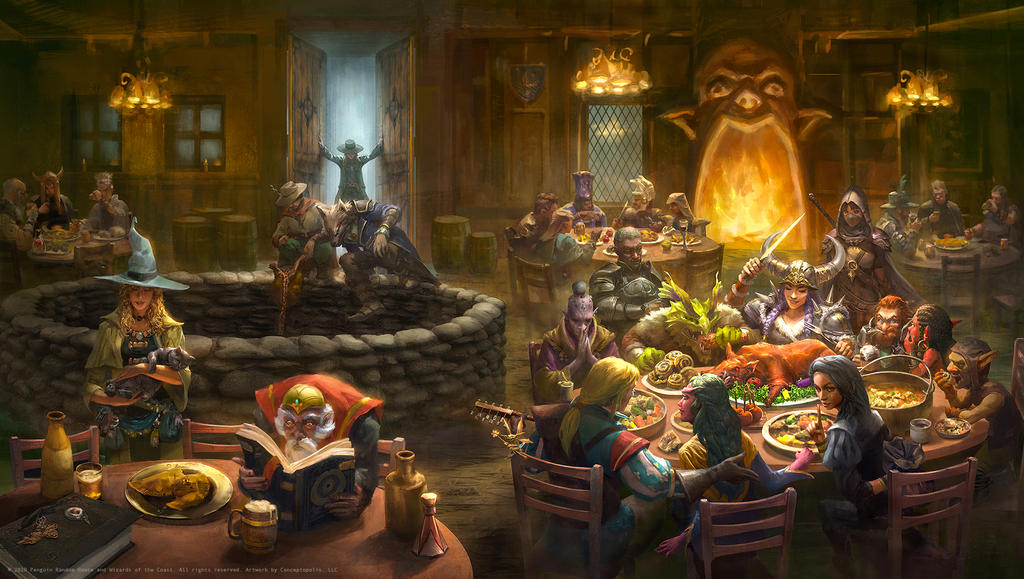 The Yawning Portal is far-and-away the most famous inn in the world. It’s a three-story stone building with a slate gray roof and several chimneys. A signboard that simply reads “The Yawning Portal,” hangs on chains from a black iron pole above the front door, announcing the entry to the inn. Well-worn boards cover the floor, but the main impression is of comfort. Rich blue tapestries of fairytale adventurers decorate the wood-paneled walls of the common room, which consist of a bar and tables of stout wood.

The inn was built in 1306 DR by Durnan the Wanderer on the ruins of Halaster’s Hold. The famous adventurer returned from Undermountain with his adventuring companion Mirt the Merciless nearly two centuries ago, laden with riches. In this place Durnan built his inn and began a gold-rush of adventurers into the deadly dungeon.

What dominates the bar, and lends the inn its name and reputation is the giant stone well in the center of the common room. The well is 40 feet across, and a waist-high stone ring is built around to prevent customers and objects to falling in. This yawning portal is the famous Entry Well that leads down into the dungeon known as Undermountain, the Dungeon of the Mad Mage.

Balconies on the tavern’s second and third floors overlook the well, with those floors accessed by way of wooden stairs that rise up from the taproom. Guests sitting at the tables on the balconies have an excellent view of the well and the action below.

The tavern is a loud, boisterous place, crowded with adventurers. The clientele of The Yawning Portal is mostly Waterdavians eager to hear the tales of adventurers who have returned or who are making their way into the depths of Undermountain. Adventurers readying themselves to enter the Undermountain can be found here listening rumors and stories about the dungeon. On the periphery, cloaked factors lurk, eying up adventurers who may take their quests.

As Durnan, despite his old age, is still a brawny man, who keeps his old greatsword visible among the racks, the Yawning Portal remains safe from toughs, though it is Waterdeeop, so brawls are still a common enough occurrence.

A staggering variety of curios and oddities adorn the taproom. Traditionally, adventurers who recover a strange relic from Undermountain present it to Durnan as a trophy of their success. Other adventurers leave such curios to mark their visits to the tavern, or relinquish them after losing a bet with Durnan, who likes to wager on the fate of adventuring bands that enter the dungeon. Occasionally, something that strikes Durnan’s fancy can be used to pay a bar tab.

On quiet nights, guests in the Yawning Portal gather around a large fireplace in the taproom and swap tales of distant places, strange monsters, and valuable treasures. On busier nights, the place is loud and crowded. The balconies overflow with merchants and nobles, while the tables on the ground floor are filled with adventurers and their associates. Invariably, the combination of a few drinks and the crowd’s encouragement induces some folk to pay for a brief trip down into Undermountain. Most folk pay in advance for a ride down and immediately back up, though a few ambitious souls might launch impromptu expeditions into the dungeon. Few such ill-prepared parties ever return.

Groups seeking to enter Undermountain for a specific reason generally come to the tavern during its quiet hours. Even at such times, there are still a few prying eyes in the taproom, lurkers who carry news of the comings and goings from Undermountain to the Zhentarim, dark cults, criminal gangs, and other interested parties.

A typical dish served at the Yawning Portal consists of quipper and chips (5sp). Shadowdark ale is a popular beverage served at the taproom (5cp). Rooms to let at the inn (when there’s room) rent for 8sp per night.