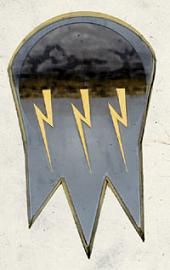 Valkur, the Captain of the Waves, is the exarch of sailors, ships, favorable winds, and naval combat.

There is nothing more invigorating than challenging the elements. The feel of wind and spray on one’s face and the deck pitching beneath one’s feet is the greatest feeling in the world. If humankind is to expand its reach, daring men and women must defy the odds and dare the impossible. The thrill of exploration is sweeter than wine or rum.

Church of Valkur: The church of Valkur is loosely organized. Many clerics serve as captains or sailors aboard ships and they usually meet each other only if they happen to serve on the same ship or be in the same port. The clergy is known for helping sailors who were down on their luck.

The Wavehall: Temple in the Dock Ward. The temple is maintained by the donations of sailors looking for safe passage to their next port

Valkur’s church celebrates only one holy day known as the Shattering. The exact date of the festival varies but it is always celebrated in the spring. The purpose of the festival is to celebrate the breaking up of ice floes in the north which marks the beginning of the sailing season.