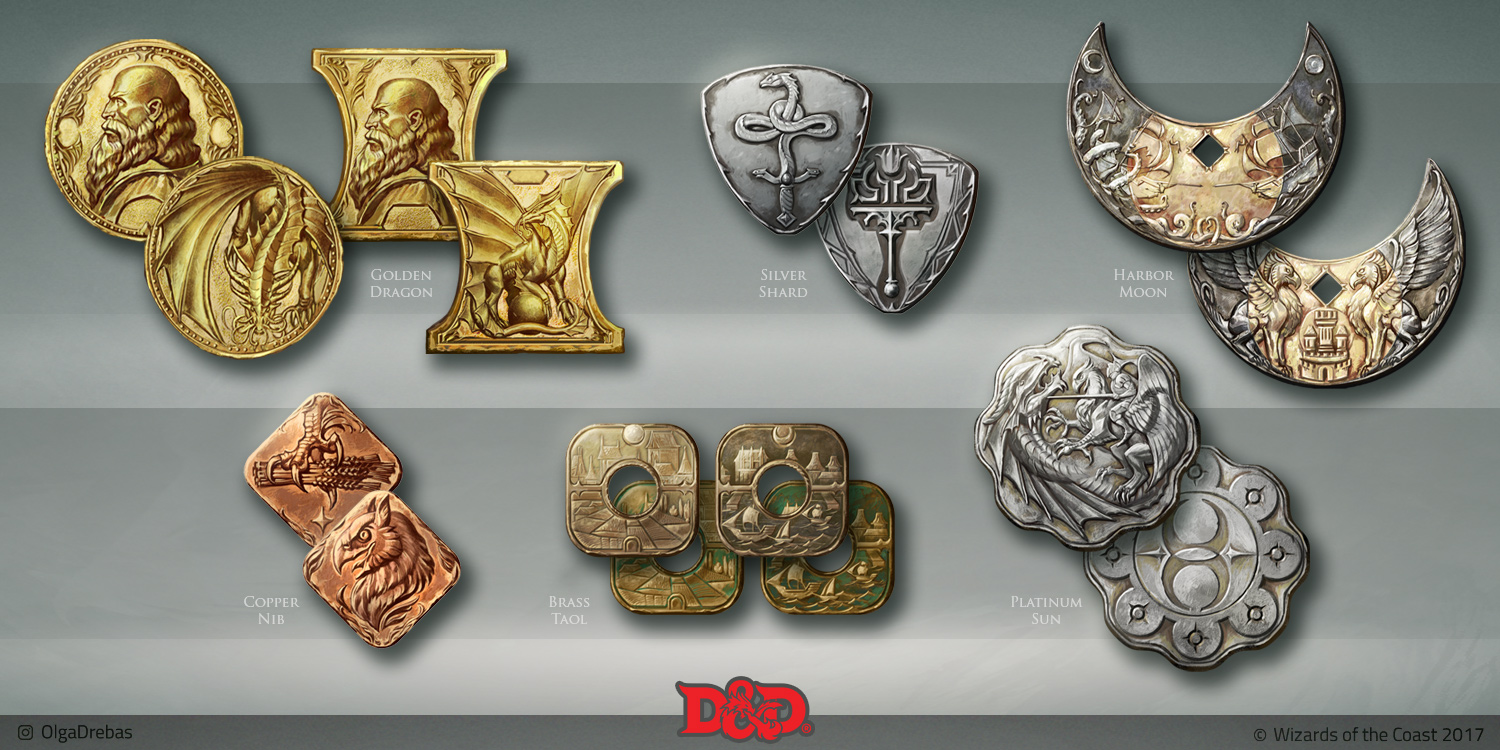 Waterdhavian-minted coins are the following:

Nib (copper piece). The nib is the Waterdhavian term for a copper piece. The coin is about the size of a thumbnail, and weighs a third of an ounce (9.4g). Its value is 1/10th of a silver shard, or 1/100th of a golden dragon. A fee of 1 nib per day is charged for the rental of a stall in the Market for a day. The nib is stamped with a griffon’s head on the obverse, to celebrate the city’s Griffon Cavalry, and a talon holding wheat sheaves on the reverse.

Shard (silver piece). A shard is the Waterdhavian term for a silver piece. The coin is slightly smaller than a nib, and weighs a third of an ounce (9.4g). Its value is 1/10th of a golden dragon. A tax of 1 shard per month is collected from each resident over 10 years of age who lives in any of the wards of Waterdeep. A customary fee of 1 shard is charged after a conviction by a magister, on top of any other fines. During wartime, a lance tax of 1 shard per household per tenday is imposed temporarily upon the city, until repealed by the Lords of Waterdeep. The shard is stamped with a sword transforming into a serpent on the obverse and the scepter of the Open Lord on the reverse.

Dragon (gold piece). The dragon is the Waterdhavian gold piece, and the currency standard in the city and its territories. It is roughly 50% larger than a nib. The coin is heavily regulated and weighs exactly 0.32 ounces (9.1 grams), so 50 coins weigh 1 pound (450 grams). The coin is stamped with the profile of Lord Neverember on the obverse, and a dragon on the reverse.

Taol (2 gold pieces). One of two unique Waterdhavian coins, the square brass “taol”, is worth 2 dragons, but has no value outside the city, so they are usually exchanged when one leaves the city. The coin is a square about 2 in (5.1 cm) on a side and the central hole is large enough to fit a nib inside. The coin is stamped with the city of Waterdeep overlooking the fields on the obverse and the city overlooking the sea on the reverse.

Sun (platinum piece). The sun is the Waterdhavian term for a platinum piece. The coin is about twice the size of a nib. It weighs exactly 0.32 ounces (9.1 grams), and it is worth 10 dragons. The coin is stamped with a Griffon Knight slaying a dragon on the obverse, and the symbol of the city on the reverse.

Harbor Moon (50 gold pieces). The palm-sized crescent-shaped platinum “harbor moon”, inset with electrum, is valued at 50 dragons in the city, but much less everywhere else. Both coins have holes to allow them to be stacked in strings. The coin is stamped with twin griffons overlooking the city on the obverse and the city harbor and ships on the reverse.

Sambar (electrum piece). The sambar coin is not currently minted, and hasn’t been since before the Wailing Years. Any old coins found must be exchanged at the Palace of Waterdeep.

Foreign currency is not accepted in the city, and all currency must be exchanged for Waterdhavian coins or stamped trade bars. Currency can be exchanged in the Palace of Waterdeep with a 1% exchange fee, but the line is so long that appointments frequently need to be made a day in advance. The Guild of Trusted Pewterers and Casters and the Jewelers’ Guild are also capable of quickly and reliably performing the exchange, but their exchange rates tend to be higher.

Waterdeep relies on the acceptance and trust of their currency, and as such, considers counterfeiting coins high treason, punishable by Death by Hanging.

Poor. Common laborers, farmers, and clerks earn 6 gp each month (paid every workweek in silver shards), nearly all of which goes to subsistence.

Modest. Soldiers, priests, and apprentices in a guild earn around 30 gp each month (paid every workweek in silver shards), which provides for a simple lifestyle.

Comfortable. Merchants, skilled guild members, and military officers earn around 60 gp each month, which allows for a comfortable lifestyle.

Wealthy. Successful merchants, well-known adventurers, and owners of multiple businesses can earn over 100 gp every month, with visible wealth and the ability to move in high class social circles.

Aristocratic. The aristocrats include the nobility, politicians, guild leaders, archmages, and high priests. They have capital of hundreds of gold every month, to the point of abstraction. Though they often deal in credit, favors, and bank notes, instead of carrying coins, they can raise thousands of gold or platinum, if needed.

Note: Waterdeep’s economy doesn’t compare very well to modern times, but as a rule of thumb, you could think of a copper nib as $1, a silver shard as $10, and a gold dragon $100.